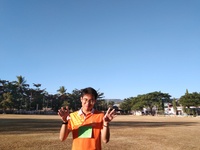 Last 7 years ago, It was a geat night because Chelsea FC that football club in England won over FC Bayern Munich in UEFA Champions League in final round. The final round was organized in Allianz Arena where is a stadium of football in Munich, Germany. The beginning of game was uncomfortable for me because FC Bayern attacked all the time. Until nearly ending, FC Bayern could lead Chelsea 1-0 by Thomas Muller's heading. After that 10 miniutes, Chelsea FC could draw by Drogba's heading, so at the moment I felt very cheerful. The teams stayed level at 1–1 and the match went to a penalty shoot-out, which Chelsea won 4–3 to clinch our first Champions League title. So that was the night that I couldn't forget.