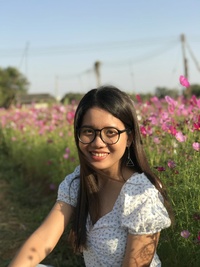 I really admire Hye-Min Park, also known as Pony, who is a South Korean makeup artist. She has gained interest internationally after she transformed herself into Taylor Swift. Pony is an inspiration for many women because of her youthful good looks, bright personality, and sense of humor. In 2008, Pony began her make up on Cyworld where she recorded a various range of makeup tutorials, product reviews, and outfit photos. The year later, she became a professional makeup artist. Not only she is a makeup artist but also she is an author, she has written four books about beauty but they are only available in Korean. The books contain loads of gorgeous and glossy images that provide makeup inspiration for anyone who picks them up. Moreover, she has her own line of makeup called " PONY EFFECT". the range includes eye-shadow palettes for easy glam, dewy lipsticks, and nail polishes. Hye-Min Park is the lady that I admire and respect because she inspires me to be successful and talented like her.